The Round Up: Country in the Crypt 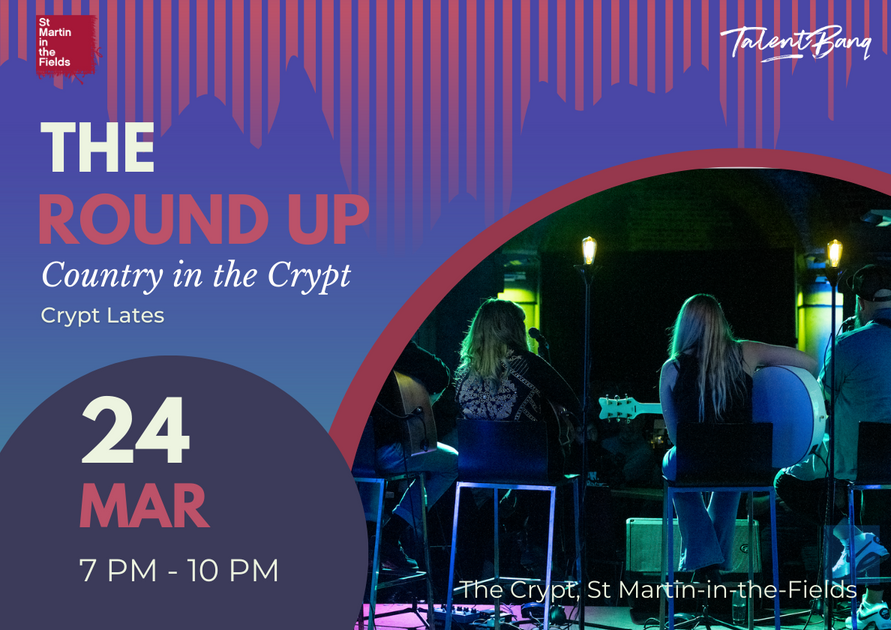 The Round Up: Country in the Crypt

The last in our Round-Up series at The Crypt sees us present the ultimate songwriter round with five incredible acts on stage plus special guests.

Songwriters rounds traditionally started at the Bluebird Cafe in Nashville, Tennessee many decades ago but this type of performance has now become popular in the UK.

Join us at The Crypt where our hosts Two Ways Home will welcome to the stage Gasoline and Matches, Anna Pancaldi, Kenny Foster, Laura Oakes and Special Guests.

An outstanding line-up to celebrate an exceptional series.

Two Ways Home
“Folk-rock with a country twist”
Anglo – Austrian duo Two Ways Home are the songwriters: Isabella ‘Isi’ MaK (Vienna) and Lewis Fowler (Gloucestershire). The pair fuse catchy melodies with luscious harmonies and rocky guitars. After their inception in 2014 and several releases, they have crafted a versatile sound, which pairs well with artists like Lady A, The Lumineers and Fleetwood Mac. The Upcoming describes the pair as “unique, unexpected and brilliant.”

Anna Pancaldi
London based singer-songwriter influenced by the likes of Joni Mitchell, Jeff Buckley and Carol King proves a rare talent and someone to remember with her mature, deep, diverse vocals and thought-provoking music.

Kenny Foster
Nashville-based singer and songwriter Kenny Foster was born and raised in Joplin, Missouri and grew up singing in church, but he was also fully aware of the pop and country songs he heard all around him, and began playing guitar and writing his first songs in high school. Winning best international song at the 2022 BCMA Awards, Kenny is always excited to showcase his songs across the pond.

When it’s normal for mealtime conversations to be conducted in three-part harmony, it was only natural for Laura Oakes to go through life singing. Her love for Dolly Parton, David Gates and the Dixie Chicks may seem an unusual music taste for a teenager from Liverpool, North West England but in her teenage years Laura really started to embrace her influences performing anywhere and everywhere.

A visit to Grand Ole Opry in Nashville at the age of 18 proved to be an overwhelming and life-defining experience, driving her to realise her dream of writing and singing country music.